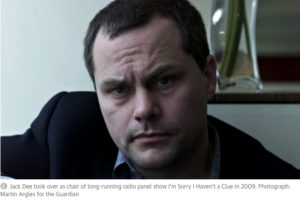 When I’m at a gig and things are not going well, I pull out the gag that always saves me: “I have never drunk alcohol in my life, because it’s against my religion – but I have taken it up the Khyber pass a couple of times.” This joke works every time, in every situation – except when the audience is full of mullahs and priests or when I’m performing in Saudi Arabia.

It was reported this week that Jack Dee has been told to tone down his smutty jokes on I’m Sorry I Haven’t A Clue, after the show received a handful of complaints from its millions of listeners. The gag that seems to have caused a little contention concerns the show’s fictional score keeper, “the lovely Samantha” – a prime source of innuendo – who was first introduced in 1985.

Apparently, one listener suggested that Samantha was demeaning to women; in an interview, the show’s regular panellist, Tim Brooke-Taylor, suggested that the team had been advised to be careful as a result and that Dee had threatened to quit. (Dee’s agent denies this last claim, and says that the discussion was “completely amicable”.)

The idea that Dee should tone down his jokes is certainly ridiculous. This is quite clearly a comedy context, and there is a difference between harmless innuendo and abusive or sexist behaviour. If Dee was on Newsnight and said to Kirsty Wark, “You were never going to be a looker were you?” that would not have been a Carry On moment – more of a John Inverdale moment. There are boundaries that need to be recognised. But we don’t want people complaining about every tiny innuendo so that we end up sterilising the world, and it becomes bereft of any kind of humour that remotely refers to a bit of how’s-your-father.

When I was growing up, my dad’s favourite programme was Panorama and his favourite film was Carry On Camping. He said: “I’m in Britain, I’m British now, I must get myself a Carry On calendar.” So he bought himself a calendar with Barbara Windsor bending over on the cover with the word “saucy” coming out of her mouth.

Smut, sarcasm, self-deprecation, and innuendo are like the Queen, fish and chips, queuing and complaining. If I wanted shouting, shooting and whooping, I’d go to America. In British humour, smut is evident as far back as Beowulf and Geoffrey Chaucer; William Shakespeare often used innuendo in his comedies. Restoration comedy is notorious both for its innuendo and sexual explicitness.

More recently, bawdy double entendres are what made the comedies of the 1970s and 1980s so great. The Two Ronnies, George and Mildred, Monty Python, Frankie Howerd, Larry Grayson – all employed some sort of smut. In the Carry On films, a simple, winking exchange about Barbara Windsor’s cleavage used to make the whole family laugh. The British love a bit of soft-core smut, a bit of wrong, a bit of inappropriate, and a lot of filth. Smut is harmless, you can take it any way you want – the right way, the wrong way, or up the Khyber pass.

The people who sometimes have a problem with it are the intellectuals, who come to comedy to analyse instead of laugh, and who feel that a bit of smut is too low-brow for them. Those are often the dirtiest, filthiest, guiltiest people, with a dark and seedy past who have something to hide. They need to laugh more than anyone else.