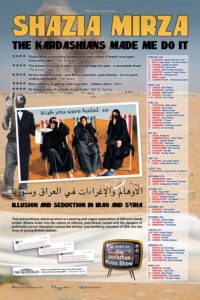 In February 2015 I was in New York staying at a friend’s house. We went to school together. She is Bangladeshi; we’re both Muslim, but we’re normal. We do karaoke, love Barry Manilow, and shoplift on a Friday. We do not harbour a secret desire to blow up Buckingham Palace, and we love Netflix just as much as the infidels.

So we were shocked when watching CNN in her living room to see three schoolgirls from Britain had gone to join ISIS.

‘We would never had done that!’ my friend shouted. ‘Stupid! Why have they done that?’ We were horrified, in disbelief. Aren’t they going to miss Nando’s hair straighteners and Tinder? All the things we do on a Saturday night for fun?

‘Young people these days are crazy,’ she said. Yes they are, crazier than when we were growing up. My parents were strict beyond belief. I was never allowed out of the house, I wasn’t allowed to go on school trips, holidays, have white friends, wear short skirts… If I looked at a boy, my parents were convinced I was sleeping with him and I should be shipped off to Pakistan to get married immediately to ‘get better’. I wasn’t allowed to pursue drama or dance or anything creative that I loved. It was repressive, depressive and difficult. But I didn’t join the IRA, or fly out to marry Osama Bin Laden.

I wasn’t planning on doing a show at The Edinburgh Festival in August 2015, but when this happened, I felt that I had something to say about it. I knew exactly what I thought. I felt angry, sad, shocked, surprised and confused. They’ve gone to join ISIS; they’re doing this in the name of Islam? And they call themselves Muslim?

Well I suppose that’s like Tony Blair calling himself a devout Catholic.

I did it at The Edinburgh Festival, as a work in progress; it went very well. People would come up to me after the show and ask one main question: ‘Why didn’t we know that?’ I said, why should you know? Unless your best friend is Imam Ahmed, how are you going to know?

I said, ‘If you want to know the truth, read the Qur’an, not The Daily Mail.’

I did the show again at The Tricycle Theatre in October; now it was called ‘The Kardashians Made Me do It’.

Then the Muslim ball picked up speed and went rolling down a hill pretty fast.

In November, these so-called Muslims attacked Paris, and then on 5 December 2015 there was a knife attack at Leytonstone tube station in London, which saw a man shouting ‘This is for Syria, Allahu Akbar’. Once again, all brown people were forced to step forward and condemn what happened like we were all spokespeople for the one Muslim village idiot.

I am really fed up at having to represent, apologize for and disassociate myself from the actions of deranged individuals who claim to share the same faith as me.

I can shout ‘Allahu Akbar’ after crossing the line at the London Marathon – it doesn’t mean I’ve won.

Blaming all Muslims for terrorism is like blaming all the Irish for Riverdance.

If one good thing that has come out of this, it’s that Muslims have been forced to discover their sense of humour and respond with laughter and ridicule.

When a so-called Muslim causes problems for the rest us, we step forward with a hashtag. The pamphleteer of our time.

The Sun newspaper recently wrote: ‘1 in 5 Muslims secretly support ISIS’ – so then #1in5Muslims started where we were forced to get funny. I tweeted ‘#1in5Muslims has stolen shoes from a mosque’ others included ‘#1in5Muslims wash their feet in the sink’.

He said: ‘We urgently call upon every Muslim to join the fight.’ He’s off his rocker.

I tweeted him saying, ‘Sorry mate but I’ve just had my nails done and I don’t want them to snap in the Wild West’. I’m also making pancakes tonight.

Shazia Mirza is on tour in Britain with her latest show, ‘The Kardashians made me do it: illusion and seduction in Iraq and Syria’, from 5 February.