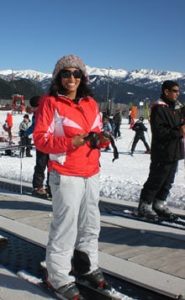 It was Monday night and I could hear Brandon Block playing his old skool disco hits from the nearby gondola car park. I was wearing jeans and a black shirt; everyone else was wearing school uniform, albeit a tighter, sexier, shorter version – shirt, tie and cleavage. I looked like a nun.

I said to my friend, “I haven’t really dressed right for this.”

A girl with a Bridget Bardot wig butted in, “I’ve got my PE kit in my bag, if you want to borrow it.”

I hesitated. But she pulled out a pair of navy gym knickers and a yellow shirt. “Go on, it’ll be a laugh!”

I put the shirt on, but gave the pants a miss. I like a bit of disco but I draw the line at borrowing used underwear from strangers. This was old skool disco night. And, like school, it went on till half past three – in the morning. As I left, I saw the bouncer wearing the navy pants.

I awoke three hours later, still wearing someone else’s clothes. The sun was shining and outside one of the cafes, a DJ was playing house music, nodding along to his headphones and occasionally waving to the crowd, who were starting to dance around him in their ski boots. It was only 9am.

This was day one of the Big Snow Festival, a new winter shindig in the resort of Arinsal in Andorra, which even in its first year promised a rather impressive lineup, including Judge Jules, Pendulum, Eddie Temple-Morris and Calvin Harris. The combination of skiing by day and clubbing by night has grown in popularity over the past decade, with many festivals each winter in Europe and America.

To me, it sounded a recipe for disaster: I can’t ski or dance and I’m scared of heights. But I had always wanted to try a holiday in the snow and at least if I was rubbish at skiing, I would be able to blame the late nights.

I signed up for beginners’ lessons with 12 others. As we practised our snowploughs, the surroundings started to work their magic. Ski veterans probably take all this for granted, but I found the mountains magnificent, and the quaint wooden chalets reminded me happily of Heidi.

After class, our eccentric Australian instructor, Matthew, invited us all to Irish bar El Derbi. It was open all day and night, and every night was Irish night. Three men were attempting to do the Riverdance in shamrock-shaped slippers. It wasn’t even teatime yet. We had a few drinks before everyone went to change into psychedelic boiler suits to go out for the night.

A few hours later, the people I’d spent the day skiing with were drinking, dancing and vomiting – including the teacher – at the Calvin Harris set. I made it home by 1am. The others stayed out till 3am but, amazingly, most turned up to class the next day.

Halfway into my first blue run I was hit in the face by a red hairpiece, followed by some false eyelashes and a nail extension. Someone obviously hadn’t managed to change between clubbing and skiing. Later, I saw two Irish girls from my class blundering down the slopes wearing boob tubes.

Next night was fancy dress night. But I didn’t know this until the Incredible Hulk approached me and asked where Judge Jules was playing. Luckily, Minnie Mouse came round the corner, and she knew the way. Apparently, all the information was on the festival website, and people had packed accordingly. The only bit of fancy dress I had was a pair of frilly Primark knickers.

Every club or bar I went into that night was a surreal experience. One minute I was being served a drink by the Pink Panther, the next I was being offered a ride home by Superman. I wish I’d been better prepared; I could have worn my Wonder Woman outfit.

Nevertheless, I stayed at Surf nightclub until 3am, and it was great fun. The men seemed to shed their inhibitions when they don their outfits, as I experienced when one of the seven dwarfs pinched my arse. We are soon to be engaged.

The next night brought a gig called the Mountain Side Stage. The only way up was by gondola, which I found scarier than the skiing. When I told the two Irish girls from my ski class I was scared of heights one pulled out a bottle of red wine and told me to drink.

When I politely declined they screamed, “Aren’t you drinking? You gotta drink!” The gondola stopped briefly in mid-air, and the girls took the opportunity to start a drinking competition: “Let’s try to finish these two bottles by the time we make it to the top.” (Journey time: five minutes.)

At the top, ski instructors were speeding down the dark mountainsides carrying flaming torches, to the sound of Pendulum and other DJs. The crazy, energetic rave atmosphere reminded me of my student days at Manchester’s Hacienda. There was a lot of drinking and dancing and wild cavorting. At only 9pm three drunk topless men were dancing on the piste, trying to dodge two massive snow ploughs. People were dancing everywhere, on benches, tables, chairs, even a car.

On the way down in the gondola, one person, who looked about 15, kept winding down the window. “It’s night, it’s pitch black, and we’re dangling in mid-air! Wait till you get to the bottom!” I shouted, like a boring cow.

At the bottom, people were walking round in flares and afro wigs. What woman goes skiing and thinks: “I must pack a spare wig”? As if there isn’t enough to remember with all the thermals, gloves, socks and goggles. Judge Jules played a great uplifting set, and then it was Brandon Block, wearing his mum’s fur coat, a wig and lipstick. Disturbing, but totally appropriate.

The festival dominated the resort while it was on, but the locals were friendly and joined in with everything. You wouldn’t get that in Klosters.