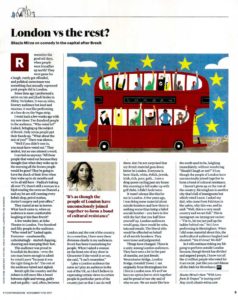 Remember the good old days, when people were friendlier up north? They were game for a laugh, rarely got offended, and political correctness was something that sexually repressed posh people did in London.

Some time ago I performed a satire on Isis and jihadi brides in Ilkley, Yorkshire. It was an older, literary audience but loud and raucous. It was like performing at a hen do on the Vegas strip.

I went back a few weeks ago with my new show. Two hundred people in the audience. “Who voted in?” I asked, bringing up the subject of Brexit. Only seven people put their hands up. “What about the rest of you?” There was silence.

“Well if you didn’t vote in, you must have voted out.” They smiled, but no one uttered a word.

I carried on anyway: “All these people that voted out because they thought that when they woke up in the morning all the brown people would be gone? They’re going to have the shock of their lives when they wake up in six months and we’re all still here — Nadiya’s baking all over TV, there’s still a woman in a hijab reading the news on Channel 4 and my lot are still running every kebab shop, petrol station, doctor’s surgery and post office.”

They stared at me in horror. What has it come to, when an audience is more comfortable laughing at Isis than Brexit?

A few weeks later, at Soho Theatre in London. Two hundred and fifty people in the audience. “Who voted in?” I asked again. Everyone — unashamedly, unhesitatingly — started clapping, cheering and stamping their feet.

This audience was proud to brandish its decision — even the one man brave enough to admit he voted Leave “because it was the right thing to do”. The rest of the audience tutted and sighed.

Brexit split the country and the debate is still more like a brawl between right and wrong, guilty and not guilty — and, often, between London and the rest of the country. As a comedian, I have seen these divisions clearly in my audiences. Brexit has been traumatising for people. When I asked a woman on the front row of my show in Gloucester if she voted in or out, she said, “I can’t remember.”

I play a London audience the same as I play an audience in the rest of the UK, as I don’t believe in expressing certain views to certain people in particular parts of the country just so that I can do well there. But I’m not surprised that my Brexit material goes down better in London. Everyone is here: black, white, Polish, Jewish, Irish, rich, poor, goth . . . I saw a drag queen cycling past my house this morning in full make-up with golf clubs. I didn’t look twice.

It wasn’t always like this for me in London. A few years ago, I was doing some material about suicide bombers and how there is nothing worse than being a failed suicide bomber — you have to live with the fact that you half blew yourself up. London audiences would gasp, there would be oohs, tuts and emails. The liberal elite would be offended on behalf of all suicide bombers. They were tense and judgmental.

Things have changed. There is a unity among London audiences. They have seen a lot in the past 18 months, not just Brexit: Westminster Bridge, London Bridge, Grenfell Tower. I am originally from Birmingham but I live in London now. It’s as if we have no option but to stick together and be proud of our city and of who we are. We are more like how the north used to be, laughing immediately, without wondering “Should I laugh or not?” It’s as though the people of London have unconsciously joined together to form a bond of cultural resistance.

I haven’t given up on the rest of the country. Birmingham is another city that’s full of immigrants but which voted Leave. I asked my dad, who came from Pakistan in the 1960s, why this was, and he said: “Well, this is a very small country and we are full.” This is immigrant-on-immigrant racism — “I’m in, let me just pull up the ladder behind me.” Yet I love performing in Birmingham. When I did some material about this, the multicultural audience laughed and shouted: “Yes it’s true! We did!”

So I will continue risking my life going to perform outside London because, though Brexit has divided and angered people, I know not all the 17 million people who voted for it are racist. Just like you can’t blame all the Irish for Riverdance.